This transcript of Steve Howard's response to the Speech from the Throne is copied from the official Hansard record of the Legislature.

To watch the video recording of this speech, go to www.assembly.pe.ca/video-archive, select "Spring 2021", click on the March 5th video and advance to the 2:36 mark.

I won’t be too terribly long here. A lot has been already said about this throne speech. But I had a lengthy response to the throne speech less than two years ago. All of what I said then still stands today.

One item from my previous response that remains entirely dormant is electoral reform. I asked the Premier about his thoughts on it at the end of the last sitting and I was encouraged to hear that he was still open to exploring this. More Islanders voted for changing the system by which we elect MLAs than voted for any one particular party that sits in this House. I think that bears attention and I implore the Premier to take action on this. Islanders like how collaborative governments work. Let’s see that it becomes the norm instead of the exception. 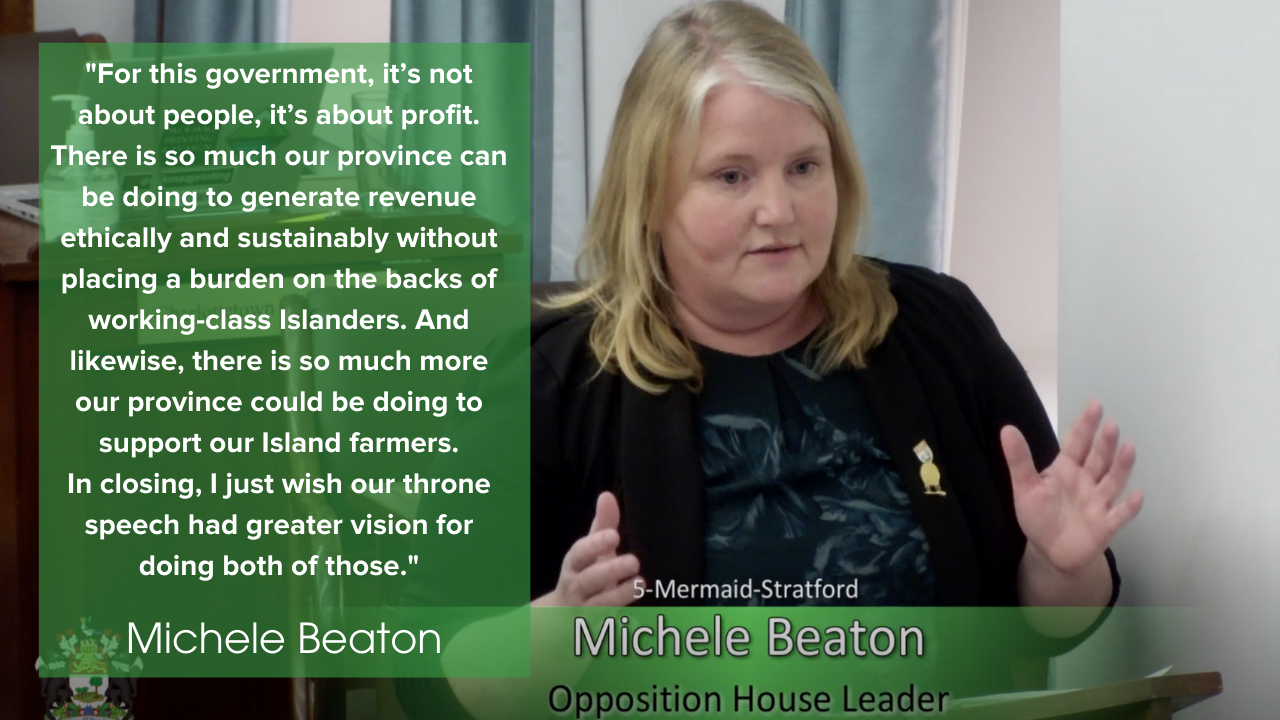 This transcript of Michele Beaton's response to the Speech from the Throne is copied from the official Hansard record of the Legislature.

It is a pleasure to rise to speak to the throne speech. I believe it’s a great honour to be in this House and to be a part of this type of proceeding and to get the opportunity to speak on behalf of your constituents and Islanders who have reached out with priorities, thoughts, concerns.

First of all, I’d like to recognize that I know a lot of work has gone into this throne speech. I know a lot of consultation and looking at what’s the best road to travel for this province, which I think is important.

I also look at how front-end loaded the throne speech is. We have some really interesting concepts and visions at the very beginning. I see something that’s really missing, and that is information from a finance perspective. I do know that there’s a couple of paragraphs focused on agriculture, but they’re jam-packed paragraphs. So, I’d just like to dig in a little bit. This transcript of Trish Altass' response to the Speech from the Throne is copied from the official Hansard record of the Legislature.

Mr. Speaker, the intention of this throne speech was to outline a brave and bold vision that our government has for this Island and it is no surprise to anyone that health care is front and centre.

We all know that not much sounds more exciting to Islanders than a brave and bold vision for their health care. The number one topic that I hear from constituents is about health care. I’m sure I’m not alone.

What are we without our health? In recent years, mental health and addictions has become a major concern for many Islanders – again, no surprise. It’s been years of broken promises from one government to the next – promises by the former Liberal government of new supports with no followthrough, and then, promises directly from this current Premier to get shovels in the ground on day one. Maybe he’s digging the hospital foundation by hand and that’s why it’s taking so long – should have promised a backhoe, perhaps. This transcript of Hannah Bell's response to the Speech from the Throne is copied from the official Hansard record of the Legislature.

I really appreciate the opportunity to be able to speak in response to the tabled Speech From the Throne. Unlike my Liberal colleagues, I am actually going to respond to the Speech From the Throne. I have not only comments on that, but also, given that the speech is a vision or a plan, what I’d like to do is actually introduce some immediate actions that I would hope to see – that the government take, particularly in response to some of those topics and challenges that have been a big point of discussion in the last few days.

I’m really encouraged to hear my Liberal colleagues speak so much about poverty, given that over the past couple of years, we’ve had to spend quite a lot of time explaining what poverty actually meant. It’s really encouraging to see them now embrace that and I really look forward to seeing that perhaps that will be reflected in support for the poverty elimination strategy act that we’ll be bringing forward later in this sitting. Charlottetown, PE - With a soaring narrative filled with exaggerated words of hope and self-praise, the King government released its budget for the upcoming year. Projecting a deficit of at least $112 M, the Minister of Finance rose and gave a story of boutique promises that amounted to crisis management by a thousand bandages.

“To listen to the King government speak today, you would think things are shiny and bright. You would be led to believe it always holds the needs and concerns of Islanders at the centre of every decision and commitment they make,” said Peter Bevan-Baker, Leader of the Official Opposition. “Unfortunately, there is no evidence for these claims.”

In our budget submission on January 6, 2021 the Official Opposition gave government a list of twenty specific requests representing what Islanders have been asking for. In the budget, the government spoke to only twelve of these asks. Sadly, many of the commitments they made in the budget are partial, vague, and lacking any actionable plan.

First of all, we hope you are well and want to thank the incredible 11,000 Islanders who went and got COVID tests over just three days last week. Wow! While the sudden emergence of COVID clusters and the B.1.1.7. variant on PEI served as a reminder that we are not out of the woods yet and vigilance is always required, the fact that 7% of our entire population, including thousands of youth, heeded the call to get tested (often waiting long hours to do so) was also a reminder of what makes PEI such a special place to live, and the lengths we are prepared to go to protect this place and each other.

In the backdrop to this, our MLAs were back at work in the Legislature. The Winter/Spring sitting began with a Speech from the Throne outlining the government's new agenda, one that Opposition Leader Peter Bevan-Baker calls "timid and tepid". I was so impressed by Peter and our other Green MLAs' articulate responses to the throne speech - and have highlighted several of them in this newsletter. I HIGHLY recommend listening to or reading them - they will surely get you thinking!

The incredible work of our MLAs reminds all of us how important the work of the Green Party is to find, encourage and support these people, and to do all we can to ensure that the Legislature is filled with intelligent, passionate, articulate and hard-working MLAs guided by Green values. In this newsletter, we remind you of some of the many ways that our Members can get involved in this important work. Not yet a member? It's never too late to join and get involved!

Please enjoy today's newsletter, and have a great weekend! This transcript of Ole Hammarlund's response to the Speech from the Throne is copied from the official Hansard record of the Legislature.

To watch the video recording of this speech, go to www.assembly.pe.ca/video-archive, select "Spring 2021", click on the March 2nd video and advance to the 2:32:40 mark.

I am, of course, so pleased that after almost two years of a resistance and little action, that this government has finally accepted the net-zero agenda that our caucus has promoted at every sitting since the last election. Changing your mind, even for good reason, is difficult for politicians, so I really respect when politicians do that, in this case, for really good reasons, as net-zero and climate change are fundamentally nonpartisan issues.

I have observed the hon. Premier is sensitive to giving and getting proper credits so please let me assure him – I hope you hear this, since he’s not here – that I give full credit to this government for adopting hook, line and sinker, our entire net-zero agenda. This transcript of Karla Bernard's response to the Speech from the Throne is copied from the official Hansard record of the Legislature.

I have to start out by saying how difficult it was for me to pull my thoughts together on this throne speech. I feared it would appear tone deaf, given what’s going on in the province right now.

It had a lot of initial thoughts jotted down in point form in front of me on the computer screen and had all sorts of things to say on each point. Then, the weekend happened and our COVID numbers started to grow, and there was so much uncertainty. I would find myself starting a task and then drifting back to scrolling through social media. It is a scary, high-anxiety time. We are all human and when our bodies spend this much time in a fight or flight response, it is hard to focus. It is energy sucking and not very productive.

Lynne Lund's response to the Speech from the Throne (2021) This transcript of Lynne Lund's response to the Speech from the Throne is copied from the official Hansard record of the Legislature.

I have really mixed feelings about the Speech From the Throne. There are some major issues in my district and I’m just not hearing the solutions we need addressed in them.

Housing is still a huge problem in Summerside. The speech says the vacancy rate is up to 3%, but it isn’t in Summerside. It’s still at 1.5% in Summerside. This lack of access to affordable and appropriate housing comes up all the time for me and in fact, even in the Charlottetown area, where the vacancy rate has somewhat improved, that’s largely credited to the short-term rentals being returned to the housing market due to a depressed tourist season on PEI. That’s acknowledged in this speech. And then, in essentially the next breath, the speech talks about the desire to reestablish the Atlantic bubble, which, of course, we need, but without any plan to protect the small gains that we’ve made in the long-term housing market.

Peter Bevan-Baker's response to the Speech from the Throne (2021) This transcript of Peter Bevan-Baker's response to the Speech from the Throne is copied from the official Hansard record of the Legislature.

It’s my honour to rise today and to respond to the Speech From the Throne and to be the Leader of the Opposition in Prince Edward Island and to be the representative of the citizens of District 17 New Haven-Rocky Point. It is a privilege to sit in this House and I never forget that – always try and remind myself how lucky we are to be here.

The central defining characteristic of our country is the constant tension between the unique and largely independent provinces that are also part of a grand, singular collective called Canada.

As Canada’s smallest province, Prince Edward Island has all of the jurisdictional privileges of the other provinces with all of the unique benefits that come with being able to craft our own path, which is suited to our unique, individual, particular situation.