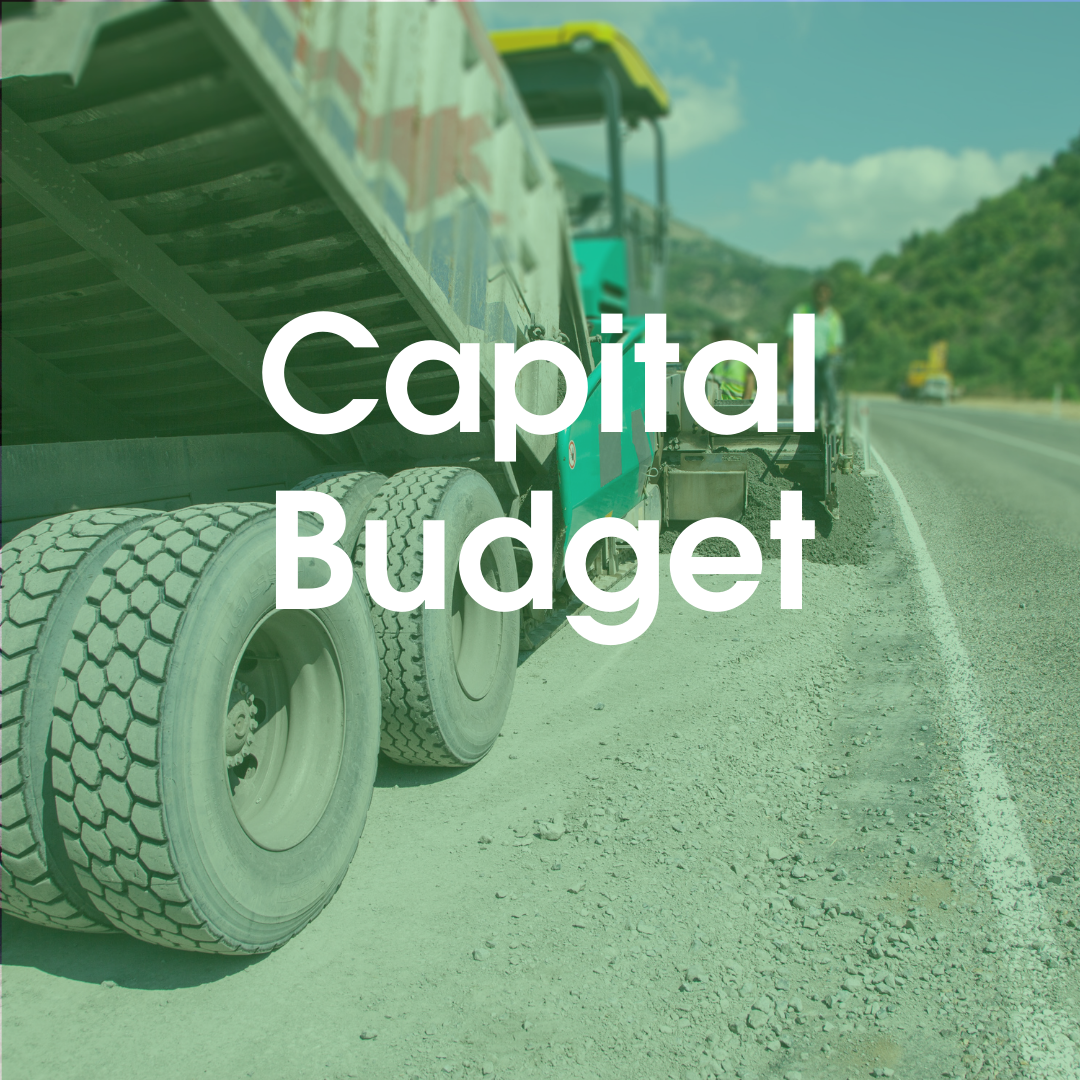 On the final day of the Legislature, the government's $195 million capital budget - the largest in PEI's history - was passed. By focussing more on investments in pavement than on much-needed investment in people (mental health, addictions, and affordable housing, for instance), this was a difficult budget four our Green Caucus to support. Making matters worse, the government also provided much less detail to the Opposition parties on the line items in this budget than it had been for past budgets - perhaps a reflection of the fact that it now has a slim majority of seats in the Legislature.

"So far we've seen more of the dithering and lack of action that typified the previous administration. In many areas of this budget, government was unable or simply unwilling to give specifics, which makes it very difficult for us on this side of the house who have critical responsibilities to review and scrutinize government."

You can read more about the Green Caucus' reaction to the capital budget, as well as what our Caucus would like to have seen in the budget, here: https://www.greenparty.pe.ca/government_places_priority_on_pavement_over_people_in_capital_budget. The last week of the sitting saw the passage of Lynne Lund's Net-Zero Carbon Act. As Lynne said in the Legislature: "Essentially the Net-zero Carbon Act is an accountability framework. It just gives support to the commitments government has already made on climate action. It gives greater transparency on the efficacy of what we’re doing to contribute to actions against climate change, how we’re spending money, the progress we’re making towards our goal. It also allows us to be upfront on the risks to communities to help them understand the need for action in the first place."

The Net-Zero Carbon Act requires the government to report annually on its progress towards meeting our targeted emissions reductions, and what it is doing to ensure that we reach those targets. It also "strikes an advisory committee, which would consult with Indigenous people, local governments, environmental organizations, academics, unions, business people, and anyone else the minister deems necessary to get feedback on both, climate actions that should be taken, potential risks, opportunities for a low carbon economy and possible pathways, legislation, policies, programs, and essentially anything else the minister deems necessary."

In addition, the Special Committee on Climate Change, with Green members Lynne Lund (chair) and Steve Howard, tabled it's latest report to the Legislature, with two additional recommendations:

These come on top of 14 recommendations already made by the committee in July. The Committee will now focus on preparing its final report to the Legislature, which will be tabled next year.

One important measure to support energy conservation is to reform our electricity rates in this province so that, instead of providing customers who use more power with lower rates (as is the case now), higher blocks of power consumption would trigger higher rates. As Steve Howard points out in this letter, not only is the current rate structure counter-intuitive from a conservation perspective, but it effectively increases electricity costs of the vast majority of Islanders in order to subsidize the lower rates for large power consumers.

That's why Steve Howard has introduced the Act to Amend the Electric Power Act, which would turn our rate structure on its head. The bill only got through First Reading in this sitting, but will be back on the table in the spring. This sitting, Charlottetown-Victoria Park MLA Karla Bernard introduced the Election Age Act - a bill that would, quite simply, lower the voting age from 18 to 16 for provincial and municipal elections. You may recall that Peter Bevan-Baker had introduced a similar bill in 2017, which ended up being defeated by the government of the day.

As Karla Bernard said in the Legislature while introducing her bill: "What are the benefits of extending the right to vote? Voting is acknowledged as a habit- forming activity. In other words, voting early in your life makes you more likely to vote again in the future. Because youth are still engaged in the education system, it is easier to reach them and to educate them about civic engagement."

PEI has actually been a leader on extending the franchise to youth. In the 2016 plebiscite on electoral reform, Islanders and young as 16 were allowed to vote - a first in Canada. If PEI lowers the voting age for elections to 16, we would be the first in Canada to do so, but we would be following Scotland and Austria where experience so far shows positive results for engaging youth in the democratic process.

While the bill has not been able to come to a vote during this sitting, it is expected to be back in the spring, and Karla Bernard feels confident that it can gain the support needed to pass.

Should 16- and 17-year-olds be allowed to vote? A Green MLA thinks so For the past year, Tyne Valley-Sherbrooke MLA Trish Altass has been chairing the Special Committee on Poverty, an all-party committee in which Hannah Bell is the second Green representative. This is a committee established by a Green motion in 2019, mandated to explore the idea of a Basic Income Guarantee (BIG) and to bring costed recommendations to the Legislature.

Trish Altass, whose work on advancing a Basic Income Guarantee and eliminating poverty proceeds her time as an MLA, grew emotional as she wrapped up her report to the Legislature: "Chairing this committee has truly been an incredible and humbling experience. For members from all three elected parties to come together and engage in meaningful and informed discussions, many of them quite complex and lengthy discussion, all with the goal to ensure every Islanders, no matter their circumstance, can live with basic health and dignity, for the wellbeing of individuals, families and communities – sorry, it’s a little emotional. I may be the first person to get emotional reading a committee report. It’s incredible. It was a great honour and more than I could’ve possibly hoped for as chair of this committee. I am so very proud to have been part of this committee and to present this report to the Legislature.

The committee's report was unanimously adopted by the Legislature, and the recommendations now lie with the government to move forward with them. 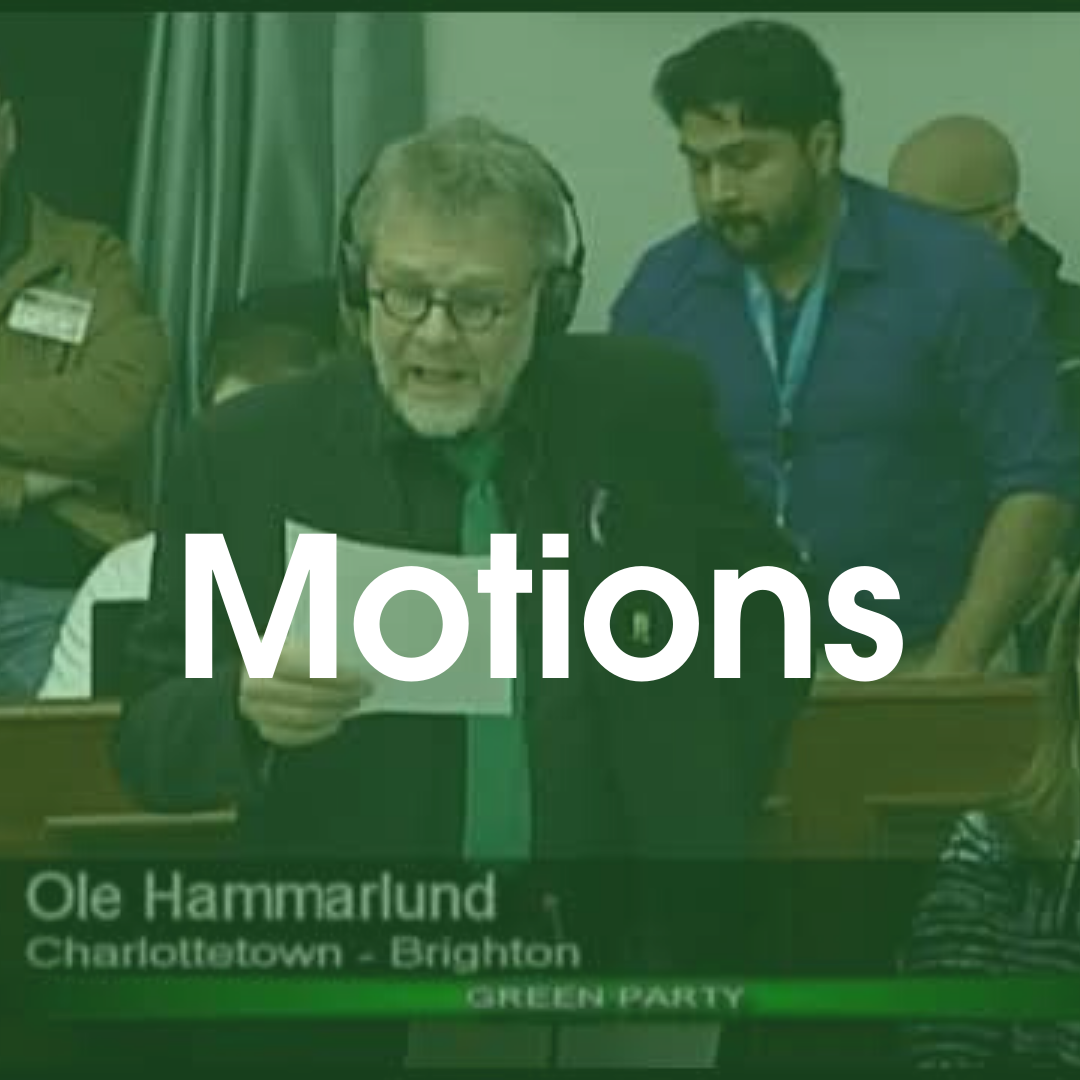 Our Green Caucus passed a number of important motions during this sitting. Motions do not have the force of law, but they are important tools for raising and debating important issues that can influence government policy and lead to new laws. For example, Green motions established the Special Committees on Climate Change, Poverty, and Government Records retention that have been doing such important work in the past year.

This motion by Trish Altass was inspired by the experience of people like Lucy Morkunas, who had seemingly arbitrarily had her request to cover a drug needed to survive a rare disease rejected, even though the drug is on the provincial drug formulary. The motion passed, and government has now agreed to revamp the way such decisions are made and communicated to patients.

This motion, also promoted by Trish Altass, called on the government to make mental health and addictions services a priority by investing in a safe and suitable space for patients who have been or might yet be displaced from Unit 9 due to COVID-19, increasing capacity at Lacey House, and finalizing plans for the long-awaited Mental Health Campus. The motion passed.

In support of the free and safe exercise of treaty rights

This motion by Peter Bevan-Baker called on the PEI government to be proactive in affirming and supporting the treaty rights of Mi'kmaq people to a moderate livelihood fishery, as per the Peace and Friendship Treaties and upheld by the 1999 Marshall decision by the Supreme Court of Canada, and called for peaceful dialogue between all parties to reconcile conservation concerns and treaty rights and to avoid the kinds of violent disputes that we have seen crop up in Nova Scotia recently. The motion passed with unanimous support.

Every year, hundreds of PEI seniors get shingles, which can cause serious health complications especially in those who are immunocompromised. Shingles is easily prevented by a vaccine these days, however the shot costs more than $240 and is out of reach for many seniors, who live on fixed incomes.

There have been calls for the PEI government to fund the Shingrix vaccine for several years, and with COVID-19 the urgency has grown, as the capacity of the health system can come under strain. The passage of this motion means that seniors can likely expect good news in the near future about government support for shingles vaccination.

This motion by Michele Beaton was unfortunately defeated. It called for IRAC to once again publish its land transaction-related orders as it routinely did prior to 2014 but not since, and to support a movement of land transaction decisions away from the secrecy of Cabinet and to IRAC as a quasi-judicial body.

A couple of Green motions have also been called for debate but did not come to a vote this sitting: As the Official Opposition, so much of the important work of holding the government to account takes place during daily Question Periods.

One good example of this was on November 19th, when our caucus dedicated the entire Question Period to the ongoing housing crisis in PEI.

From the stretched capacity at shelters, to the continued lack of a government point person on housing since the firing of Clifford Lee last year, to the need to better support the needs renters and seniors, the Green Caucus will continue to hold the government's feet to the fire on this important issue. 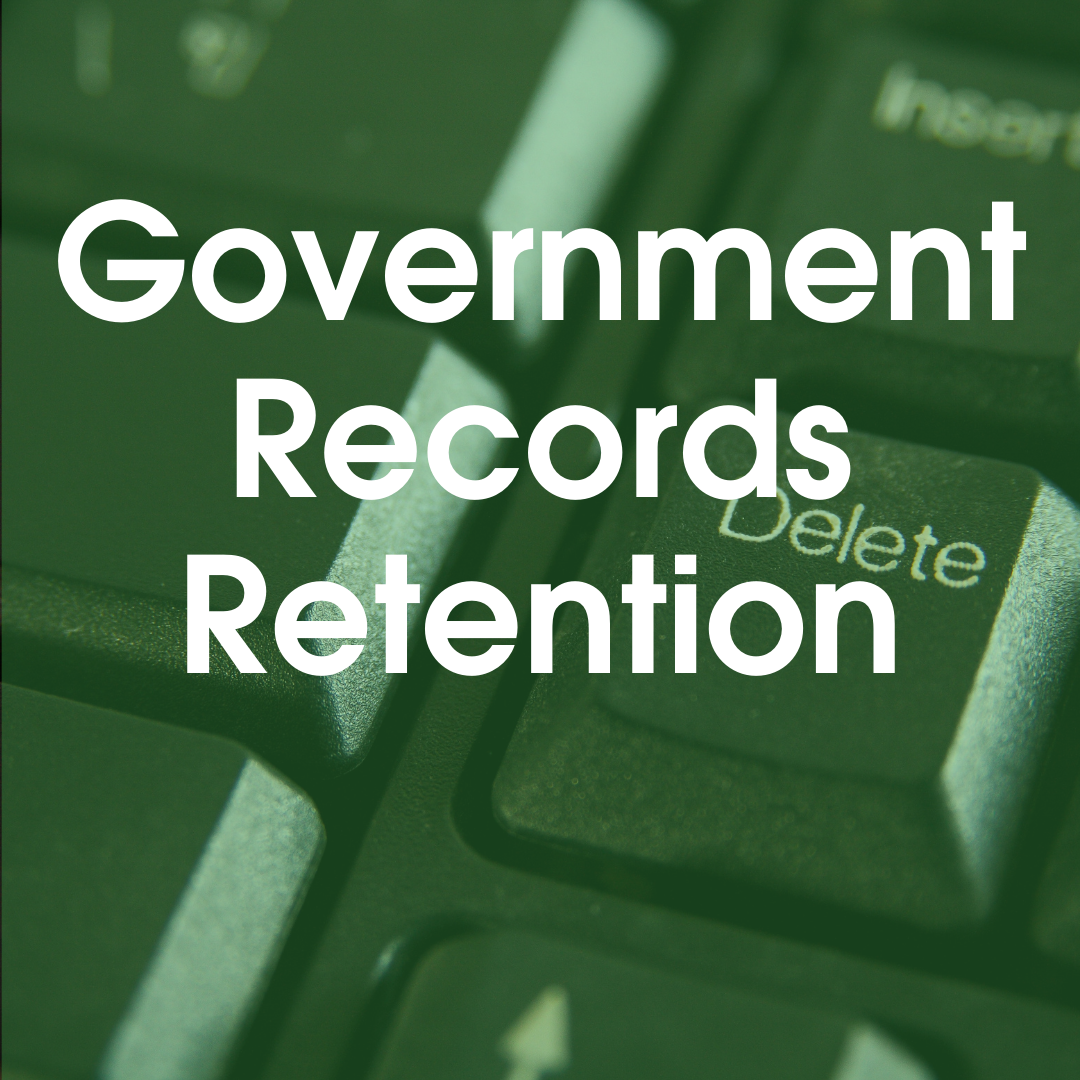 In the previous sitting, a Green motion resulted in the creation of the Special Committee on Government Records Retention. This committee, chaired by Mermaid-Stratford MLA Michele Beaton, was mandated to both investigate the case of the infamous missing (or deleted) emails in the E-gaming affair, and to recommend how to prevent important government records from going missing again in the future.

While the committee was unable to get to the bottom of the E-gaming emails, it did come up with a number of good recommendations to improve government records retention going forward. You can read the Committee's final report here.

None of this would be possible without your support.

Please consider making a year-end donation today, and benefit from tax credits worth up to 75% of your gift at tax time!